What is the Kemp-Kasten Amendment?

The Kemp-Kasten amendment, first enacted in 1985, is a provision of U.S. law that states that no U.S. funds may be made available to “any organization or program which, as determined by the [p]resident of the United States, supports or participates in the management of a program of coercive abortion or involuntary sterilization.” It was the congressional response to a Reagan administration decision in 1984 to temporarily withhold some funding from UNFPA and to begin conditioning its funding on assurances that the agency did not engage in or provide funding for abortion or coercive family planning. This policy change was made after concerns arose about whether UNFPA supported China’s coercive population policies. It was announced by the Reagan administration at the 2nd International Conference on Population in 1984, in conjunction with the “Mexico City Policy.” The Mexico City Policy required foreign NGOs to certify that they would not “perform or actively promote abortion as a method of family planning” with non-U.S. funds as a condition of receiving U.S. family planning assistance; the Trump administration recently expanded this restriction to include all U.S. global health assistance (see the KFF explainer on the policy).

What U.S. funding does Kemp-Kasten apply to?

Kemp-Kasten applies to all funds appropriated under the State and Foreign Operations appropriations act as well as any unobligated balances from prior appropriations. This includes all funding provided to the State Department and USAID, which, in turn, includes the vast majority of U.S. global health funding.

When has Kemp-Kasten been in effect?

The Kemp-Kasten amendment has been in effect for 36 years. First enacted in 1985, its language has been included in the State and Foreign Operations appropriations act every fiscal year since then. (Although the provision is present in current law, language similar to Kemp-Kasten was also included in President Trump’s presidential memorandum reinstating the Mexico City Policy on January 23, 2017.) While Congress has kept the amendment in place annually, it remains up to the president to determine whether or not to invoke Kemp-Kasten as a reason to withhold funding from an organization (see below).

Though Kemp-Kasten technically could apply to funding provided to any organization or program (including U.S. NGOs, non-U.S. NGOs, multilateral organizations, and foreign governments), the U.S. government has issued determinations about only one organization, UNFPA, thus far. To date, the U.S. has withheld funding from UNFPA in 19 of the past 36 fiscal years due to presidential determinations that it violated Kemp-Kasten. These determinations have been made along party lines with only one exception – the first year of President George W. Bush’s administration (see Figure 1 and Table 1). In some years, funding was also withheld from UNFPA based on other provisions of the law. 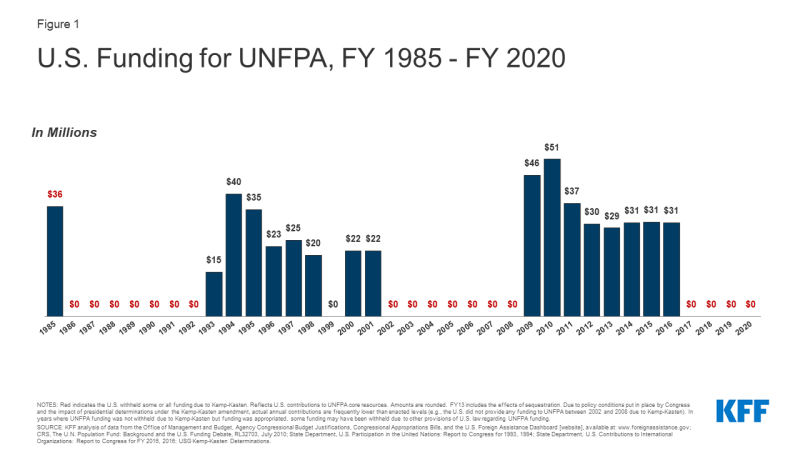 How much funding does the U.S. provide to UNFPA?

The U.S. played a key role in the launch of UNFPA in 1969 and was, until 1985, the largest donor to the agency. More recently, in 2015, the U.S. was the third largest donor to UNFPA, having contributed almost $76 million (8% of all contributions), and in FY 2016, the U.S. contributed $69 million to UNFPA, including $30.7 million in core support and an additional $38.3 million in non-core support for other project activities. Congress included $32.5 million in core support for UNFPA for FY 2017 – FY 2020, and in each year, the Trump administration invoked Kemp-Kasten to withhold this funding, as well as millions more for other specific project activities. In FY 2021, Congress included $32.5 million in core support for UNFPA, which with the resumption of U.S. funding to UNFPA at the direction of President Biden is expected to be contributed. According to UNFPA, contributions to core resources allow the agency to support any activity, while contributions to non-core resources – funds earmarked for a specific purpose – may only be used for the stated project or activity. Governments provide contributions toward UNFPA core and non-core resources on a voluntary basis, since UNFPA does not assess a required contribution from governments.

How is a determination about Kemp-Kasten made?

By law, it is up to the president to determine whether any organization or program should be ineligible for funding due to a violation of the Kemp-Kasten amendment (in practice, this authority has generally been delegated to the State Department). In most recent years, legislative language has also specified that this determination must be: 1) made no later than six months after the date of enactment of the law that includes the provision and 2) accompanied by the evidence and criteria used to make the determination.

Has there ever been evidence that UNFPA supports coercive abortion or involuntary sterilizations?

To date, there has not been evidence that UNFPA supports coercive abortion or involuntary sterilizations. Several evaluations by the U.S. government (including one by an assessment team sent to China by the State Department in 2002) as well as other groups, such as the British All-Party Parliamentary Group on Population, Development, and Reproductive Health (in 2002) and the Interfaith Delegation (in 2003), have found no evidence of direct engagement by UNFPA in such activities in China or elsewhere. In addition, UNFPA does not promote abortion as a method of family planning or fund abortion services. In years when a determination has been made that UNFPA violated Kemp-Kasten, the U.S. government has stated that the determination was based on its conclusion that UNFPA support to or partnering with the Chinese government for other population and reproductive health activities was sufficient grounds for invoking the amendment to withhold funding. In the March 30, 2017, determination by the Trump administration, for example, the justification memorandum stated that: “While there is no evidence that UNFPA directly engages in coercive abortions or involuntary sterilizations in China, the agency continues to partner with the NHFPC [China’s National Health and Family Planning Commission] on family planning, and thus can be found to support, or participate in the management of China’s coercive policies for purposes of the Kemp-Kasten amendment.”

What other legislative requirements apply to U.S. funding for UNFPA?

In addition to Kemp-Kasten, there are several other provisions of law that Congress has enacted in recent years to set conditions on U.S. funding for the agency. These provisions:

What happens to funding that is withheld from UNFPA?

For several years, including FY 2017, FY 2018, FY 2019, and FY 2020, Congress has required that funding withheld from UNFPA be reallocated to USAID’s family planning, maternal, and reproductive health activities. The enactment of this provision first affected reallocation of FY 2002 funds. It is now typically included in the State and Foreign Operations appropriations act each year.

Public Opinion on Prescription Drugs and Their Prices

Jun 15, 2021 PEDRO
We use cookies on our website to give you the most relevant experience by remembering your preferences and repeat visits. By clicking “Accept”, you consent to the use of ALL the cookies.
Cookie settingsACCEPT
Manage consent