Sources of Payment for Uncompensated Care for the Uninsured

Uncompensated care costs for the nation’s uninsured averaged $42.4 billion per year in the 2015-2017 time period. While substantial, these costs significantly declined following implementation of the Affordable Care Act’s coverage expansion, down from $62.8 billion per year in 2011-2013. Although health care providers incur substantial cost in caring for the uninsured, the bulk of their costs are compensated through a web of complicated funding streams, financed largely with public funds from the federal government, states and localities. This brief estimates the level of public funding that was paid to help offset providers’ uncompensated care costs for the uninsured in 2017. To conduct the analysis, we rely on several secondary data sources including government budget appropriations and expenditure data for major public programs that provided funds to cover the cost of care for the uninsured, as well as analyses of secondary data sources completed by others.  Key findings include:

Given the rise in the number of the uninsured since 2017, provider uncompensated care costs associated with caring for the uninsured have likely increased. Between 2017 and 2019, the number of uninsured grew by an estimated 1.5 million.  In addition, with the economic toll brought on by the pandemic, the nation’s uninsured rate may have continued to climb in 2020. With the increase in uninsurance since 2017, provider uncompensated care also likely increased.  As policymakers undertake efforts to expand coverage and assess the financial impact of the pandemic, understanding uncompensated care costs and the adequacy of public funding to help defray these costs can help direct policies targeted to the uninsured. With substantial public funding of uncompensated care, government costs associated with increases in coverage could be offset in part by savings in other parts of the public ledger.

Uninsured people use less care than their insured counterparts, but when they do use care and cannot pay for it themselves, the cost of that care is uncompensated.  Providers may absorb these costs as bad debt or tap into funding sources designed to cover some of the costs. However, these funding sources  may be inefficient or may not target funds to providers with the most uncompensated care, which can  leave uninsured people with bad debt, credit issues, or even bankruptcy.

The economic downturn caused by the COVID-19 pandemic has potentially led to millions more people in the United States being uninsured. In addition to posing challenges to these individuals’ ability to access needed health care and be protected from medical debt, rising uninsured rates could exacerbate issues with uncompensated care costs associated with providing health care to the uninsured.

In the aggregate, we estimate that government payments to offset the cost of uncompensated care for the uninsured totaled $33.6 billion in 2017 (Figure 1 and Table 1).  The federal government contributed nearly two-thirds of these payments, an estimated $21.7 billion. States and local government payments accounted for the remaining amount, $11.9 billion. 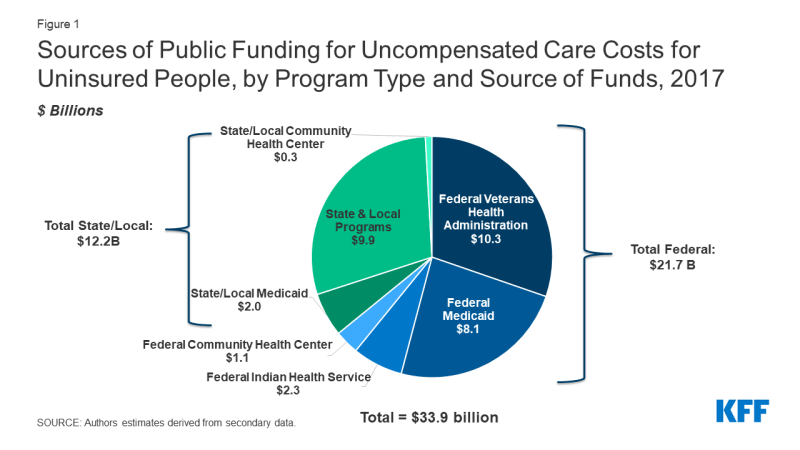 Figure 1: Sources of Public Funding for Uncompensated Care Costs for Uninsured People, by Program Type and Source of Funds, 2017

The Veterans Health Administration was the single largest government payment source, spending an estimated $10.3 billion in caring for the uninsured in 2017, all of which was federal funds (Table 1). With estimated spending totaling $9.8 billion, funding provided through the Medicaid program followed closely. Medicaid payments to cover the cost of care for the uninsured were split between DSH payments ($4.4 billion) and uncompensated care pool payments ($5.4 billion).  The federal government accounted for more than four-fifths of this Medicaid funding, reflecting states’ use of alternate financing arrangements to finance their share of DSH and uncompensated care pool funds.

The remaining share of uncompensated care (about 20 percent) may be covered by private sources, provider charity, or possibly transferred to other payers in the health care system. While, overall, government funding offsets nearly four-fifths of provider uncompensated care costs, it does not pay for all of these costs.  Based on our estimates, about $8.8 billion is not covered by public dollars included in this analysis.  Some of this remaining share may be accounted for by public sources not considered in this analysis, though in earlier analysis we estimate those amounts to be relatively small. Private funding sources (e.g., workers compensation, provider charity and philanthropic organizations), which we did not consider here, may also cover some of the residual share. Some of it may be also be paid for by the privately insured through increased health insurance premiums. The extent to which providers shift costs associated with shortfalls in Medicare and Medicaid payments and caring for the uninsured to private payers has been a long-standing health policy question and remains unsettled. While limited research has been conducted on provider cost shifting to pay for charity care associated with the uninsured,considerable work has examined whether hospitals charge private payers more because of shortfalls in public payments. Evidence on this question is mixed, showing that provider’s ability to do so is largely based in market power, cost shifting occurs at a relatively low rate, and when it occurs it does so well below a “dollar for dollar” shift.

Even with the significant coverage expansion afforded by the ACA, provider uncompensated care costs associated with caring for the uninsured remain substantial. In other recent work, we estimate that these costs averaged $42.4 billion each year in 2015-2017. At the same time, as reported here we find that the government covers the vast majority of uncompensated care costs; we calculate that nearly 80 percent of these costs were compensated with public funding.

Importantly, though, our analysis examined providers’ uncompensated care costs and sources of public funding in the aggregate, not at the individual provider level. The federal government, states and localities support multiple programs designed to help offset provider uncompensated care costs, and targeting of payments made under these varied programs has been a longstanding issue. Thus, some providers may incur costs treating the uninsured and receive little to no compensation.

Apart from rising uninsurance, changes to government payments to cover uncompensated care costs have occurred since 2017, and more are scheduled.  Beginning in in fiscal year 2020, for example, the distribution of Medicare hospital uncompensated care payments changed so that hospital uncompensated care levels rather than Medicaid and Supplemental Security Income (SSI) days are used to allocate these payments. Estimated to total about $8.4 billion each year, this Medicare policy change provides a substantial new funding source to help offset providers’ uncompensated care costs associated with the uninsured. On the other hand, sizable reductions in federal Medicaid DSH allotments are scheduled. Under current law, cutbacks in federal funding totaling $8 billion each year are set to start fiscal year 2024 and run to fiscal year 2027. As policymakers undertake efforts to expand coverage and assess the financial impact of the pandemic, understanding uncompensated care costs and the adequacy of public funding can help direct policies targeted to the uninsured. With substantial public funding of uncompensated care, government costs associated with increases in coverage could be offset in part by savings in other parts of the public ledger.

Teresa A. Coughlin and Haley Samuel-Jakubos are with The Urban Institute. Rachel Garfield is with KFF.

Abr 9, 2021 PEDRO
We use cookies on our website to give you the most relevant experience by remembering your preferences and repeat visits. By clicking “Accept”, you consent to the use of ALL the cookies.
Cookie settingsACCEPT
Manage consent